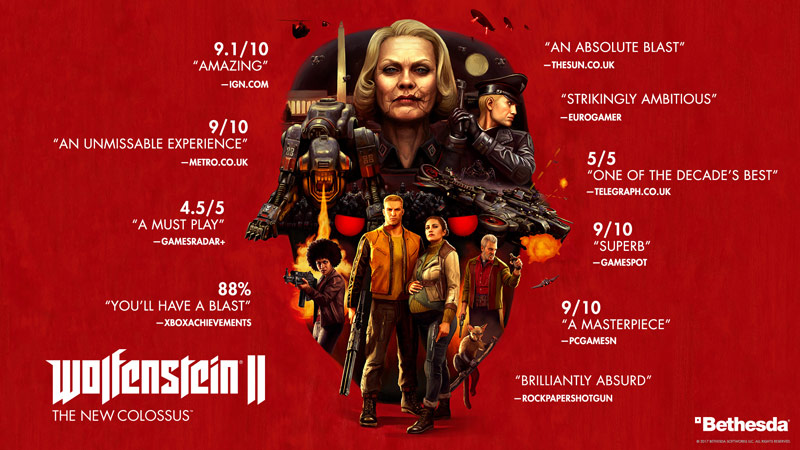 Wolfenstein® II: The New Colossus™ is the highly anticipated sequel to the critically acclaimed first-person shooter, Wolfenstein®: The New Order™ developed by the award-winning studio MachineGames.

An exhilarating adventure brought to life by the industry-leading id Tech® 6, Wolfenstein® II sends players to Nazi-controlled America on a mission to recruit the boldest resistance leaders left. Fight the Nazis in iconic locations such as small-town Roswell, New Mexico, the bayous and boulevards of New Orleans, and a post-nuclear Manhattan. Equip an arsenal of badass guns, and unleash new abilities to blast your way through legions of advanced Nazi soldiers and über soldiers in this definitive first-person shooter.

America, 1961. Your assassination of Nazi General Deathshead was a short-lived victory. Despite the setback, the Nazis maintain their stranglehold on the world. You are BJ Blazkowicz, aka “Terror-Billy,” member of the Resistance, scourge of the Nazi empire, and humanity’s last hope for liberty. Only you have the guts, guns, and gumption to return stateside, kill every Nazi in sight, and spark the second American Revolution.

Play without limits to more than 2 000 games easily ! Video games for the whole family on every device: PC, Mac, mobile... Let's enjoy!
Follow all the news about video games: releases, trailers, e-sport, and so much more...
Are you dreaming about launching your Start-up ?! Find all our softwares to launch your own company: accounting, management, billing!

0
Steam Game Installation Guide
All "Steam" games must be installed via the "Steam Client" software.
To recover your game, follow each step of the guide:
1. Steam Client
a. Client download
If the Steam Client is not already installed on your PC, go to the Steam installation page (http://store.steampowered.com/about/) for download and installation.
b. Account Creation
Once the installation is complete, if you do not already have an account on the Steam platform, you must create one in order to connect.
Warning: this account is independent of the Fuze Forge platform
2. Collect your game
a. Activation of your Steam key
Launch the Steam Client and log in to your account.
Click on the "LIBRARY" tab,
> then on the link "ADD A GAME"
> and finally, "Activate a product on Steam":
Enter the unlock code provided by Fuze Forge and click "Next":
The activation of your game is over:
b. Installation
Follow the on-screen instructions to download, install and play your game.
Search for a game
The visual cryptogram is the three-digit number on the back of your credit card.
By continuing your visit to this site, you accept the use of cookies for statistical and personalization purposes, necessary for the proper functioning of the service. Learn more OK
You just added this game to your cart

Wolfenstein II: The New Colossus
SEE MY CART
You are in offline mode !